An improved version of this path tracer is available here. 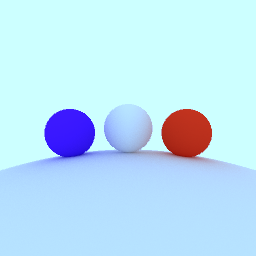 Click to start. If it doesn't work in your browser and it's not IE or Opera, please write a comment. The output of the javascript error console would be very helpful too.

Path tracing is a way of solving the rendering equation using monte carlo integration. It is a form of ray tracing. According to wikipedia 'Path tracing is the simplest, most physically-accurate and slowest rendering method'. Sounds like the perfect target for a javascript experiment!

My implementation is currently only calculating the diffuse term of the rendering equation. The only light source is the sky. The big sky speeds up the rendering and convergence quite a lot.

The sourcecode is split up into two files. main.js is the glue for initializing the workers and aggregating the results. worker.js is where you'll find the real meat. I'm spawning four workers right now to take advantage of modern multicore cpus. Feel free to ask questions if something is unclear.

As you can tell from the sourcecode it is clearly not optimized for performance. What is still interesting though is how various webbrowsers perform. On my Intel Core i7 machine google chrome (4.1) is roughly 26 times faster than firefox (3.6)! Chrome does 13 iterations/s, Firefox does 0.5. Also firefox seems to support only 3 workers, this leaves one core almost idle. The dev version of chrome is even faster at 18.75 iterations/s. My congratulations to the chrome and v8 developers. I hope firefox will catch up soon.

On a side note, I created a twitter account for those who prefer it over the rss/atom feeds.

I found a little bug in the code that affected the performance. I'm now getting more than 20.5 iterations/s in chrome dev. I think a faster random function would make it even faster.