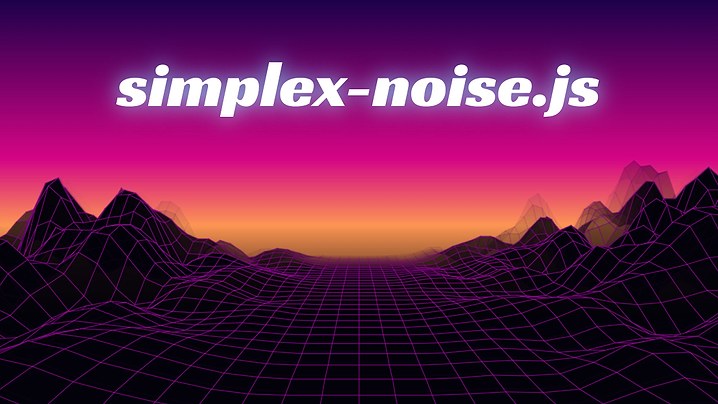 I’ve just released version 4.0 of simplex-noise.js. Based on user feedback the new version supports tree shaking and cleans up the API a bit. As a nice little bonus, it’s also about 20% - 30% faster.

It also removes the bundled PRNG to focus the library down to one thing - providing smooth noise in multiple dimensions.

The following bit of code should illustrate the changes to the API well:

Tree shaking reduces the size of bundled javascript by leaving out code that isn’t used. As author of a library it enables me to worry less about the bundle size impact of features that might not be used by the majority of users.

A little demo to celebrate

The release of 4.0 and getting over 1’000 stars on github was a good excuse to write a little demo to celebrate. For some extra fun I’ve decided to constrain myself to code a bit like I did in 2010 again. Canvas 2d only. No WebGL. :)

The performance implications of that decision are pretty terrible but it’s not like the world needs a demo to proof that quads can be rendered more quickly anyways. ;)

The demo uses 2 octaves of 2d noise from simplex-noise.js in a FBM configuration. The noise is then modulated with a few sine waves to create a twisting road, mountains and more flat plains.

At the highest resolutions the demo is pushing 4096 quads/frame! A bit more than the SuperFX Chip on SNES could handle. ;)

If you are interested in more details the code is available on github.

With tree shaking reducing the impact of rarely used code it could be fun to add a few more features to simplex-noise.js in the future. A few ideas that come to mind are: