Finally after a long time I can present you a new demo. It is inspired by the wave propagation formula mr.doob demoed a while ago. I was quite amazed by how simple it was and so I decided to build myself a little pond. 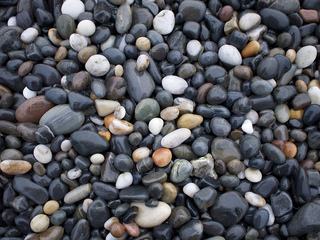 Click the screenshot to start the demo. Move your mouse over the pool to disturb the water.

I think the really interesting part here is the wave propagation formula:

Given are two height maps (buffer0 and buffer1). The buffers get rotated every frame so buffer0 points to heights of the wave in the last frame and buffer1 to the one before it. The height of the wave in the current frame at a certain point is calculated by simply averaging the height of the neighboring points in buffer0 and subtracting the height in buffer1. You can think of it like this, every point wants to be at the same height it's neighbors are and it wants to go towards zero. That is basically all there is to the wave propagation (I also added some simple filtering to make it a bit smoother).

In short it's all fake.

Chrome is fast, firefox is slow, at least thats the way it usually is. To my pleasant surprise the jaeger monkey builds of firefox seem to finally catch up. Another interesting thing is that safari seems to be the fastest (for this demo).

The photo was shot by Travholt licensed CC-BY-SA. As mentioned in the intro, I got the wave propagation function from mr.doob.